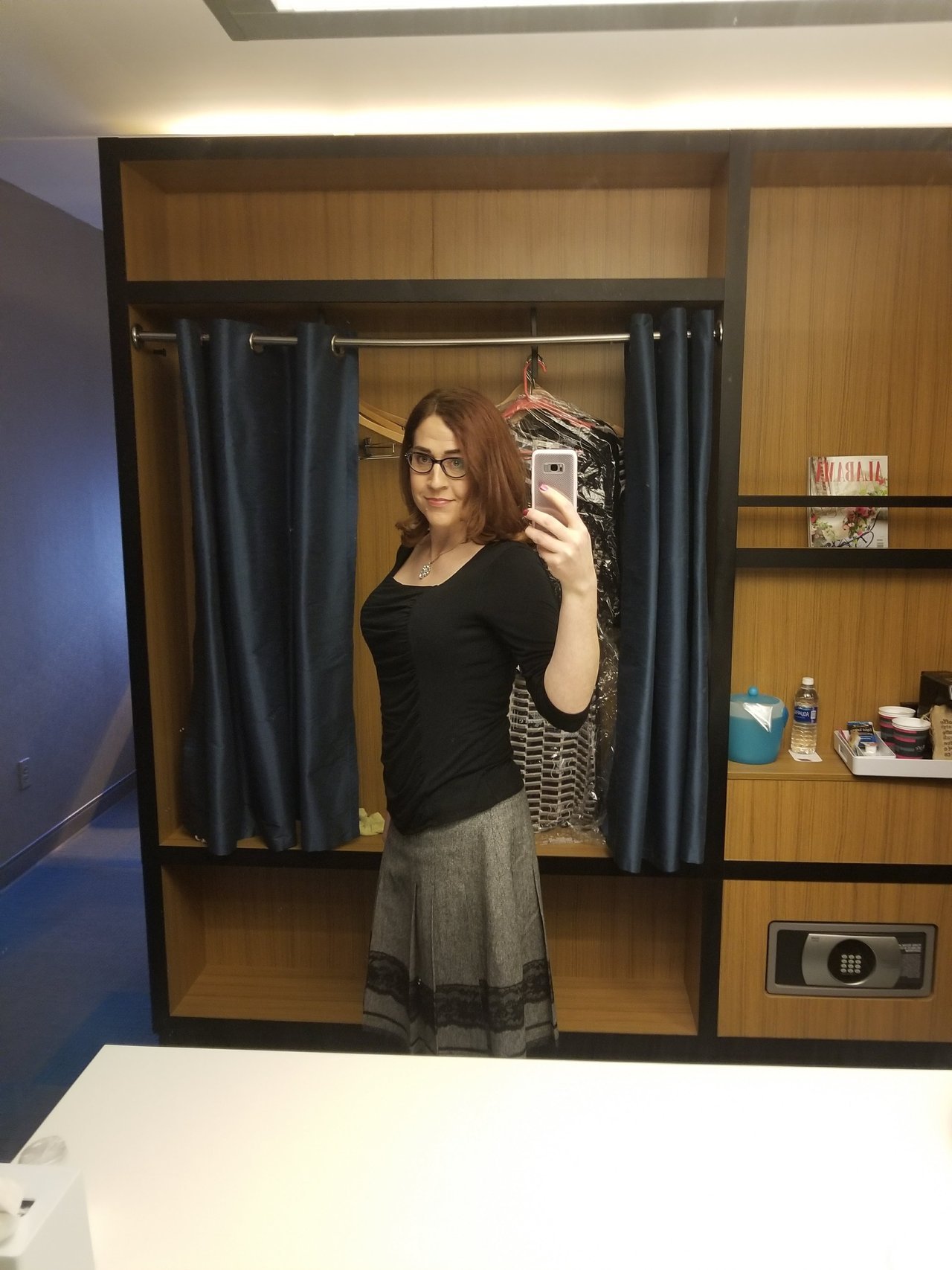 Time for another quarterly work trip to Birmingham, AL 😉

Mid-transition and pre-op, these (4 times a year) trips were stress inducing affairs. I would spend every free moment days beforehand trying to plan what to pack and running errands to make sure I had everything I could possibly need. The first few of these trips I constantly had a nagging low level anxiety regarding getting through the TSA checkpoints. The TSA agents correctly chose the Female button every time, but the machine would buzz and usually I would have to be patted down. Amazingly, there were occasional times when I passed the scan without an anomaly detection (good tucking ftw!). It got easier though and I would not stress about it as much and just expect it.

This particular trip to Birmingham was my first to that location since my surgery (I also flew to San Francisco earlier this year and you can find my posts for that if you wish). This meant that the TSA body scans should not require me to be patted down due to an “anomaly” being detected in my crotch area. However, there was the risk of my vaginal dilators setting off a package alarm, which I unfortunately learned on the way to San Francisco. In that incident, I was asked if I wanted a private room for my “full pat down” while they swabbed my bags. I was annoyed so I just said, “no, let’s do this right here”. It had me red-faced I am sure, but I just decided it was best to endure it. Let people look and wonder what was going on.. I mean, who cares?!

Well, thankfully I have now moved up to the hard plastic dilator that looks more like a typical adult toy.. and my bag did not set off an alarm 🙂

As far as the trip went, it was great considering it was only a whirlwind 56 hour event. My boss and I had a nice surprise waiting for us at Hertz.. this was the rental car:

He and I both agreed the camaro’s low visibility while driving would not put it high on the “would buy” list. It was comfortable and a nice ride though. It sure is a pretty car too!

We arrived at dinnertime so we met some co-workers at Sky Castle Tavern for some drinks and food. I had salmon, veggies, and fries with some Angry Orchard (loved it!).

Day one of the all day planning meetings would see me show up in a dress that might have honestly been pushing the dress code a bit, but I was feeling good and wanted to look good.

Thanks to the nice weather, I only needed a light jacket, so I left my heavy trench coat on the hangar. It turns out I would regret that later that evening!

During the meetings, I felt very at ease. I had many people come to say hello to me and they were all smiles. I also sought out a few of my former teammates (I switched to a different development team last year) to catch up with them briefly. Several people asked how I was doing since “you know..”, which again reminded me that people do take notice that I am transitioning and those that know about my surgery do wonder how I am getting along. The answer is AMAZINGLY 😉

I also had an opportunity to talk to Heather, the co-worker that sent me a gift certificate to have a custom necklace made when I announced my transition years ago. She is awesome! The necklace I created was a metal ring that read “Just Be You.” I wore it almost everyday during the toughest months of my transition. I still wear it from time to time.

These meetings involve over a hundred people sitting at various tables arranged by team. As each team does their planning, it is a great opportunity to just walk over to other teams that you may have a dependency on and ask any questions you need answers for regarding your own planning. This particular set of meetings I did not have many questions asked of me but I was glad to be there and be available if needed. My level of involvement all depends on what software will have the most updates in that upcoming quarter. You can imagine that being in a bustling room like that can begin to drain you of your energy if you are an introvert. Actually, I recently took the personality test again and I am now right at the line between introvert and extrovert.. I have become so much more social it is no surprise. To re-charge and to pee because of all the coffee.. I took a walk to a bathroom I found last year that gets less foot traffic. It has a huge mirror and nice lighting so it is a good place to check myself and renew my confidence by seeing my own smiling mug.

How does this help me you ask? Well, hoping no one catches me in the act I goof off a bit like this…………..

Hey everyone, look at this hottie behind me!

I also took a good.. “try and legislate me into the boys bathroom” pic..

I returned to the meeting feeling happy and energetic and finished out the day.

That night, we went to two different places. The boss of my boss always takes us out for a fun night and she is a blast to hang around. She also highly approves of me being my true self and after a few drinks even asked how dating was going now that I had my surgery. I told her I am actively dating again and “so far so good” 😉 It is going great by the way.. it feels like a whole new world. I do not yet have anyone that I am seeing on a regular basis and that is totally fine with me. The hunt and new experiences are exciting and nerve-wracking in a fun way.

The first place we went to was a rooftop bar called Moonshine. Yes, that is their specialty drink! I had two glasses of Apple Pie Moonshine (with cranberry). It was so good but very sweet.

This is a picture of the view from the rooftop featuring the “gargoyle”.. and here comes the cold front and rain that made me miss my heavy trench coat..

After enjoying Moonshine, we went out for sushi at Bamboo on 2nd. I was allowed to take the lead in ordering and I think I did a decent job of picking plates that people liked. I was one of maybe three people in attendance that love sushi. It was devoured so that is a good sign 🙂

When we returned to the hotel, I decided to use my drink ticket that the concierge had given me.

My friend Laura was game to go “have one more drink” and so she and another co-worker and I ended up hanging out at the hotel bar for another couple of hours! It was some great bonding time as the guy that was with us is someone that tests my work and it is good to be on a friendlier basis with him now.

After getting back to the hotel fairly late, it was still time to dilate! For space in my TSA quart sized bag I had to put my antibacterial lube in a general purpose plastic container. It was laughably labeled as “soap” 😉

Yes.. there is a point where the chore of dilating becomes “fun.”

The next day I went back to the skirt I was wearing when I flew out, wearing otherwise clean clothes with it of course.

Take note of the metal buttons on my left side.. they will be mentioned later 🙂

During the late morning on day 2 of the meetings I started to drag a little. Travel catches up with me as does the early wake up times after enjoying food and drink the night before 🙂 You can definitely see it catching up with me in this picture (I think I look tired!).. also this gives you an idea of the clustered and crowded room we were in. It was normally much more crowded and noisy than when I took this pic..

So, I felt it was time for a trip to my favorite restroom to recharge my batteries..

Not long after this, my boss and I went to the 4th floor to check out the new demo cubes that we hopefully will be getting in our office location soon. They are convertible powered standing/sitting desks!

I can’t wait until these get setup at my office, it will be wonderful!

Not long after seeing the cubes, it was already time to hop in the Camaro and head back to the airport. The TSA scan did pick something up this time, but it was just those metal buttons on the side of my top, so the female agent just had to lightly pat my side and she sent me on my way.

It was a great, quick trip. The only thing that I regretted was that once I was in the sunlight in the very bright white Alabama airport.. I noticed that my tights were actually NAVY! Oops! I can’t believe I even brought them. With orange-ish lighting and cloudy weather I certainly did not notice and I hope no one else did. Can you tell from the pics?? It is not a major deal, but I felt like an amateur and I certainly am not!

I hope you all have an amazing week. I apologize that I have not been streaming on Twitch lately, but it has taken a back seat to both my work trip and to some dates I had scheduled.

I will be back streaming soon though!