Maiden Ariana Gets the First Rose 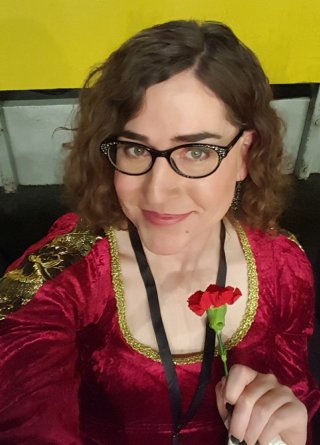 This past Friday, I went to Medieval Times Dinner and Tournament with my women’s group. We had a row of 13 women cheering on the Yellow Knight. When he first came out with a rose after being introduced, he pointed directly at me, then threw the rose right to me and I caught it.

I blame it on the red dress 🙂 I was wearing the dress I wore to the Renaissance Faire this past summer. Needless to say, the girls all cheered happily around me after I caught the rose and my faced turned as red as the rose and my dress. 0.o I wore it in my hair for the rest of the night.

After the dinner and tournament were done, we all went out into the hall to meet the knights. Of course I was prodded to take a picture with the knight who threw me the rose and one of my friends joined us for the picture.

I also let one of my friends talk me into a photo with the red knight because my dress matched him “too well” – She was right and it is a memorable pic..

Shortly after that picture was taken the Announcer/Herald/Orator of the show, who was also dressed as a Knight was talking to our group and one of the ladies was trying to get him to go out to a bar with us. He declined, breaking character to say he would “get in trouble” if he did (guess he is married). Anyway, this is the same knight who picked up my paper crown after it fell off when we first got there.. he handed it back to me with a big smile saying “Milady.” After he declined the invitation to the bar, he said he must take his leave of us then said, “but before I go (and he points two fingers at me and says in his loud announcer voice) I MUST SAY.. WELL DONE!!” He then clapped for me. He was referring to my “look”. I grabbed the side of my dress, smiled my best smile, curtsied and gave my thanks! The girls all ate this up of course. 🙂

Here is a picture of the Announcer/Orator knight:

Later on, most of the ladies in our group decided to continue the fun at a nearby bar. I knew this would probably happen, but I had let one of my friends from the group talk me into dressing up with her anyway. Here she is in costume with me below..

She chose not to go to the bar so I was the ONLY ONE in costume going. Oh well.. just takes a little more courage right? 🙂

Anyway, we of course had an absolute blast at the bar. We played giant Connect Four and Giant Jenga, and we also danced.

As I was leaving the bar with one of my friends the hostess stopped me and asked if I worked at Medieval Times. We explained that I did not, but we went there for a celebration. It turns out I don’t mind being mistaken for regular royalty 😉

I was all smiles when I got home at close to 2 am and I was still full of energy because it was such a fun night.

This amazing night was almost missed, because I had a perfect excuse to cancel. I had a silver filling removed at the dentist earlier that day. It did not go well and they shot me up with novocaine 4 times because they kept hitting a nerve and could not seem to numb that area. I came home with a temporary crown, a huge headache and just wanted to sleep. However, I held ice to my face, finished my work day, and then started trying to talk myself into going anyway. I took more advil, and started to get dressed in normal “night out” clothes, but then my friend texted me.. “Hey, are you dressing up in your renaissance dress tonight?” … and the rest is Renaissance history!  😉

Oh, and I am now declaring this the “Decade of Ari” because I am having too much fun to stop it at just one year. I may settle down after the Decade of Ari is over and I am 52, but I sure hope not.

p.s. I am so grateful for my friends.